Highlights from the 2017 Civic Learning Conference 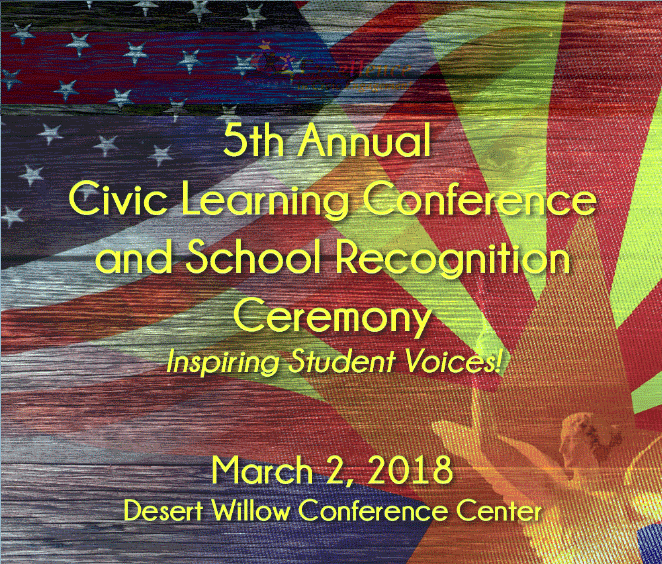 Click to view the program
Inspiring Students Voices!
Hosted by The Arizona Department of Education

Mary Beth Tinker was born in 1952 and grew up in Iowa, where her father was a Methodist minister. Her parents believed that religious ideals should be put into action, and the whole family became involved in the civil rights movement in the 1960’s. One of Mary Beth’s early memories is of her parents going to Ruleville, Mississippi in 1964 as part of Freedom Summer, an effort organized by Robert Moses and the Student Nonviolent Coordinating Committee (SNCC) to register African Americans to vote. By 1965, about 170,000 U.S. soldiers were stationed in Vietnam. Graphic footage of the war was carried into households everyday in this first “televised” war. As a 13-year-old student in eighth grade, Mary Beth was strongly affected by news of the war. She and her brothers and sisters, alongwith other students in Des Moines, decided to wear black armbands to school to mourn the dead on both sides of the Vietnam war. The armbands were also in support of a Christmas truce called by Senator Bobby Kennedy that year. The Des Moines school board tried to block the students from wearing the armbands, and most of the students who wore them were suspended, including John Tinker, Chris Eckhardt, Ross Peterson, Bruce Clark and Chris Singer. The American Civil Liberties Union took the case to the Supreme Court for named plaintiffs John and Mary Beth Tinker and Chris Eckhardt. In 1969, the Court ruled in a landmark decision that students in public schools do have First Amendment rights. Justice Abe Fortas wrote in the majority opinion thatstudents and teachers do not “shed their constitutional rights...at theschoolhouse gate.” Mary Beth continues to educate young people about their rights, speaking frequently to students groups across the country. Anadvocate for the rights of youth, particularly in the areas of health and education, she is a retired pediatric nurse who has been active in her union, SEIU, and holds masters degrees in public health and nursing. In 2000, the Marshall-Brennan Project at Washington College of Law at American University named it’s annual youth advocacy award after Mary Beth. In 2006, as a tribute toTinker’s devotion to the rights of young people, the ACLU National Board of Directors’ Youth Affairs Committee renamed its annual youth affairs award the “Mary Beth Tinker Youth Involvement Award."