These AZELLA General FAQs are not specific to an AZELLA test administration.

How many AZELLA test administrations are there in one school year?

There are 2 AZELLA test administrations in one school year.

The annual Spring AZELLA Reassessment Test is administered during a scheduled 7-week test window in late January or early February through mid-March. All students with an EL need are required to participate in this test administration.

Yes, ADE in partnership with Pearson provides extensive training and qualifications for the administration of the AZELLA Placement Test and the Spring AZELLA Reassessment Test.

What do I need to know about student privacy and FERPA?

The Family Educational Rights and Privacy Act (FERPA) (20 U.S.C. § 1232g; 34 CFR Part 99) is a Federal law that protects the privacy of student education records. This law applies to all schools that receive U.S. Department of Education funds under applicable programs, including the states' English Language Proficiency assessments such as AZELLA.

AZELLA materials may contain Personally Identifiable Information (PII), and sensitive information about a student’s educational background and historical performance. As such, we are all responsible for protecting and securing AZELLA materials to prevent the accidental disclosure of the information they contain.

Do not include students' names and/or date of births in the body of emails. Use their State Student Identification (SSID) number. When images are included in the body of emails, all student identifiable information except for the SSID number must be extracted or blacked-out before adding the image to the email.

What is an Overall Proficiency Level of Proficient?

An EL student must achieve an Overall Proficiency Level (OPL) of Proficient on the AZELLA to be exited from EL program services. An OPL of Proficient is demonstrated by receiving the minimal scale score point for the Proficient level for Total Combined, Reading, and Writing. We refer to this as the three prongs. All 3 must be a proficiency level of proficient. 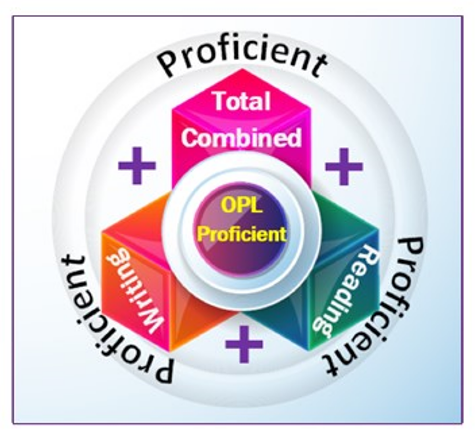 The Overall Proficiency Level and the Total Combined Score are not the same thing.

There is no raw score, or Scaled Score associated with the "Overall Proficiency Level."

The "Total Combined" is a Scaled Score with its own proficiency levels; this is not the Overall Proficiency Level. Rather, the Total Combined raw score is a weighted sum of Reading, Writing, Listening, and Speaking raw scores.

For Kindergarten, it is simply a sum of Reading, Writing, Listening, and Speaking raw scores.

A raw score is a weighted sum of score points that a student earned on items across all domains (Total Combined Raw Score) or for a domain (Domain Raw Score). For each AZELLA administration, we derive score tables for Total Combined and Domains that converts from a raw score to a Scale Score which carries the same meaning across administrations. A cut score, which is on a scale score, is the lowest scale score point for a student to earn a Proficiency Level. For example, 2327 is the lowest scale score for a student at Kindergarten (Reassessment Test) to be Proficient on Total Combined. That is the cut score on Total Combined for Kindergarten.