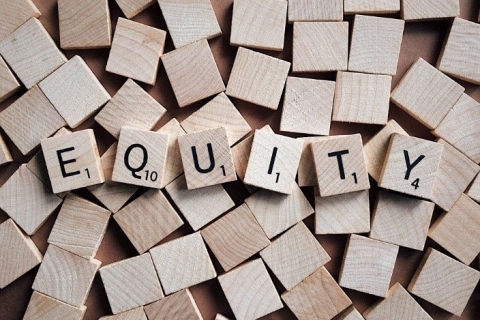 A CALL TO ACTION

School Support and Improvement, we will lead with equity. We want to reaffirm and reinforce our commitment to equity, diversity and inclusion given current events that highlight persistent racial biases in our society. We are committed to listening, learning and taking action to ensure we are addressing inequities in ourselves, our services and systems.

OUR SHARED CORE VALUE OF EQUITY

Our role is to support LEA and schools to develop systems and structures ensuring success for ALL students. We know that we must intentionally create dialogue and take appropriate action to support schools in addressing inequities and developing high quality, equitable environments that are inclusive of ALL students. We cannot expect each and every Black, Latinx, Native and Indigenous, and marginalized Asian child to thrive academically and reach their full potential if they are not being nurtured and supported in the most fundamental ways and that includes personal safety, and social, emotional, and mental well-being. We believe we have a collective responsibility to transform and create equitable systemic changes so ALL students in Arizona can thrive.

OUR COMMITMENTS TO ACHIEVING EQUITY 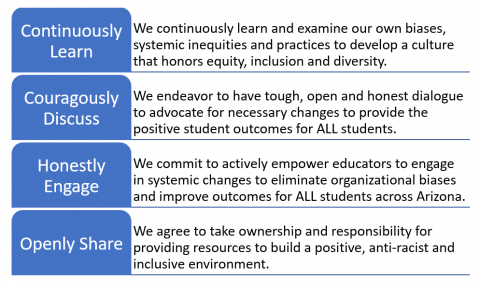 We challenge you to stand with us to create equity for ALL students in Arizona. Here are some strategies and resources to help start the conversation and create systemic change. Each LEA and school should use these resources to support best practices.

Our web page may provide links to third-party sites that have already started this work and have developed tools and resources.

Building the Understanding of Race & Equity

Educational Equity means that every student has access to the right resources they need at the right moment in their education, despite race, gender, sexual orientation, ethnicity, language, nationality/immigration status, disability, family background, family income or zip code.

In our work, we will define Racism as prejudice, discrimination, or antagonism directed against a person or people based on their membership of a racial or ethnic group, typically one that is a minority or marginalized. It is the belief that different races possess distinct characteristics, abilities, or qualities, especially to distinguish them as inferior or superior to one another.

So, what is Systemic Racism?

When Do We Discuss Race? Are kids too young? They’re Not Too Young

Netflix - When They See Us Ava DuVernay stopped the world when she told the stories of the (now) Exonerated Five. This is a cautionary tale for some on the dangers of making the narrative match a racist agenda and insight into the fear of Black families across the country, and world.

Fruitvale Station Directed by Ryan Coogler When advocating around police brutality, we often lose touch with the humanity of those we fight for. In this masterful film, we see a glimpse of what is stolen from us each time police use excessive force.

NetFlix – Dear White People This has drawn controversy from many who have been afraid to push past the title, but it’s great insight to the inner workings of Black student activists and their campus experiences.

If Beale Street Could Talk Directed by Barry Jenkins Activism can be very glorified by those privileged to be advocating from the abstract. This film—part love story, part drama—gives us a look into what is truly at stake for those facing wrongful incarceration head on.

The Children’s March Youth-led activism has been on the rise since the fearless survivors of Parkland sparked a 21st century gun violence movement. To understand the shoulders on which we stand, learn about the children of Alabama that brought a racist police chief and segregation to its knees.

I Am Not Your Negro Directed by Raoul Peck James Baldwin has provided novels, personal essays, and prose to last many lifetimes! The film adaptation explores the extended history of racism through Baldwin’s recollections and personal observations.

Kimberle Crenshaw The Urgency of Intersectionality: Following 2016, ‘intersectionality’ became quite the buzzword, yet gets used out of context often by both the Right and Left alike. Hear from the black woman who coined the term in the ’80s as to how we use intersectionality to defend Black women.

Baratunde Thurston How To Deconstruct Racism, One Headline At A Time: Racism isn’t funny, but in this TED talk you’ll learn about the pervasive nature of racism and laugh out loud way more times than you’ll be able to count.

Verna Meyers  How To Overcome Our Biases? Walk Towards Them:  #AllLivesMatter is the new color blind and both terms are proof that people fear being accused of biases more than they feel committed to addressing them. Let’s lose the shame and take bold steps deeper into your allyship.

Rayna Gordon Don’t Be A Savior, Be An Ally:  Sometimes with the best intentions we still fall short. Hear from Rayna about thoughtful allyship that seeks to uplift and support not take over or “save.”

The New York Times: A Conversation on Race – A series of short films about identity in America New York Time Series on Race

Unafraid of the Dark  by Rosemary L Bray: Racism feels like this big scary monster which can make some of us feel like we don’t know where to begin in dismantling it and others feel it’s not relevant to them at all. Bray sets the record straight with these vignettes and anecdotes about what racism looks like in practice but also how police interventions can work to alleviate the pressures.

When They Call You A Terrorist by Patrisse Khan Cullors: Cullors co-founded Black Lives Matter over five years ago alongside two other Black women organizers. Years later, she reflected on her own journey to that moment and what it means to be labeled a terrorist by the government that has sought to erase you and those you love.

100 Ways to Support – Not Appropriate from Native People by Simon Moya-Smith “Natives have been so cancelled out of the American conversation that people don’t even know where to begin to include us…a collection of do’s and don’ts.” 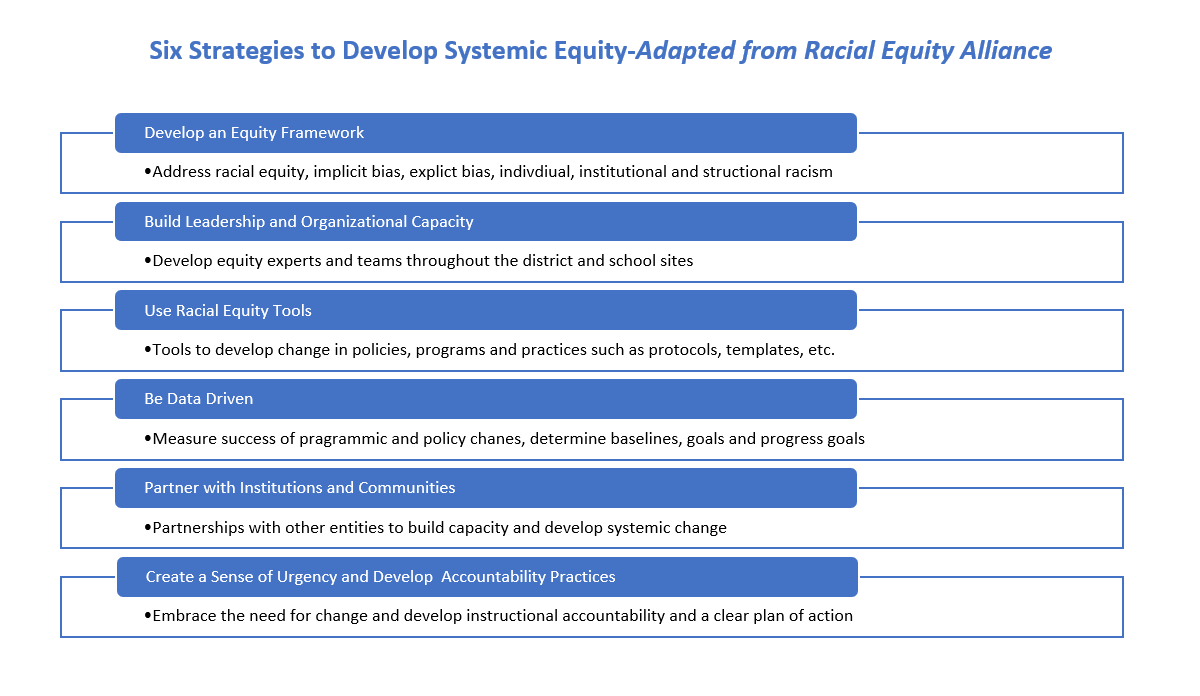 This audit will help you identify gaps in your systems and practices to determine areas of inequities that need to be addressed. Click Here for Mid Atlantic Equity Consortium's Equity Audit

To guide your work we recommend using Teaching Tolerance's Difficult Conversations to support your discussions as you work in unity to develop your Racial Equity Plan.

Teaching with Equity in Mind

"How to Start Talking About Race in the Classroom

Beyond the Golden Rule: A Parent’s Guide to Preventing and Responding to Prejudice

You Can Have a Black Friend, Partner, or Child and Still Be Racist

How White Parents Can Talk to Their Kids about Race

From the School Support and Improvement Blog

Resources to ensure equity through the application of SEL Practices