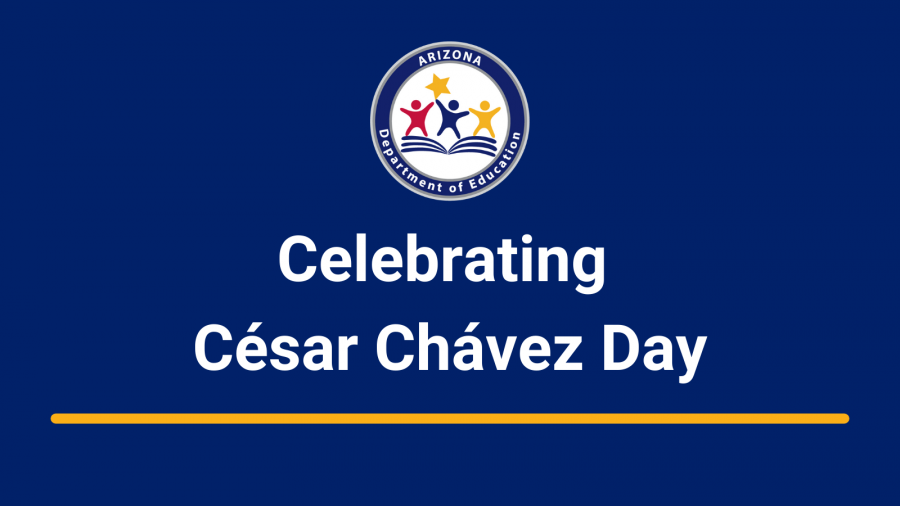 César Chávez Day is observed in the United States on March 31st each year to celebrate the birthday of union and civil rights activist César Estrada Chávez and commemorate his lifelong commitment to social justice and dignity for all human beings. Like many other civil rights leaders, his work was greatly influenced by his peers, most notably Dolores Huerta and Larry Itliong.

In honor of César Chávez’s legacy, the Arizona Department of Education’s Office of Equity, Diversity, and Inclusion compiled resources to help celebrate the lives and accomplishments of Chávez, Huerta, and Itliong in your classrooms and communities.

Born near Yuma, Arizona, César Chávez’s journey into a prominent civil rights activist is rooted right here in Arizona. Moving between Arizona and California for much of his childhood, Chávez’s young life was reflective of the many diverse communities that made up farmworkers in the Southwest. It was those experiences that led him to dive into philosophy, education, civil rights, and nonviolence. Following his co-founding of the National Farm Workers Association (NFWA), later to become United Farmer Workers (UFW), Chávez's prominence as a civil rights leader increased. Using boycotts, pickets, strikes, and fasts, Chávez, Huerta and others sought to improve working conditions for farmworkers through the power of unions and collective bargaining agreements. His fasts, one lasting 36 days, are testament to his commitment to La Causa. Read more about his life story.

Born in New Mexico, Dolores Huerta’s beginnings were rooted in activism and compassion. Founding the Agricultural Workers Association to press local governments for barrio improvements, Huerta was primed to lead when she met Chávez in 1955. Together, they co-founded the National Farm Workers Association (now United Farm Workers) in 1962. Learn more about her life and work in advancing labor and women’s rights.

After immigrating to the United States from the Philippines at the age of 15, Larry Itliong began a lifelong journey as a laborer and workers’ rights activist in the fisheries and canneries of Alaska. He became rooted in California’s labor movement after settling in Stockton, the gateway to Central Valley, where he founded the Agricultural Workers Organizing Committee (AWOC). From his work with AWOC, he was invited to help organize Filipino grape workers in Delano – setting off the Delano Grape Strike where he would eventually meet César Chávez and Dolores Huerta. A year later, Itliong’s AWOC and Chávez and Huerta’s NFWA merged to become the United Farm Workers (UFW).

Incorporate their stories into your classroom and schools

Help bring the story of César Chávez and his colleagues Dolores Huerta and Larry Itliong to life for your students.