As April begins, we are sneaking in a few more highlights to celebrate Arizona Youth Arts Month. We are excited to highlight how theatre programming at an Arizona school contributes to social and emotional learning and positive school climate at Create Academy.

“Theatre for Healthy Emotional Development” is an arts-based residency run by Rising Youth Theatre in partnership with Create Academy, a Phoenix elementary school. Rising Youth Theatre teaching artists engage students in learning and practicing healthy personal, interpersonal, and social skills. These critical skills support academic learning, and lead to a long-term positive relationship with school. Theatre skills are the program foundation, providing participants with an emotional “toolbox” for this critical work. The entire school community is involved in the project. Artists use storytelling, interactive installations, improvisation, and collaboration tools with students as they practice being engaged citizens of their school and neighborhood. The program extends into the neighborhood through a unique partnership with Social Spin, a local laundromat. This partnership brings the learnings into home spaces as well, bridging into community spaces where families, health, education, and youth development intersect. Now in its second year, this program has resulted in a higher student retention rate, reduced instances of bullying, and increased youth participating in peer to peer advocacy and a higher competency related to healthy social-emotional skills and behaviors. 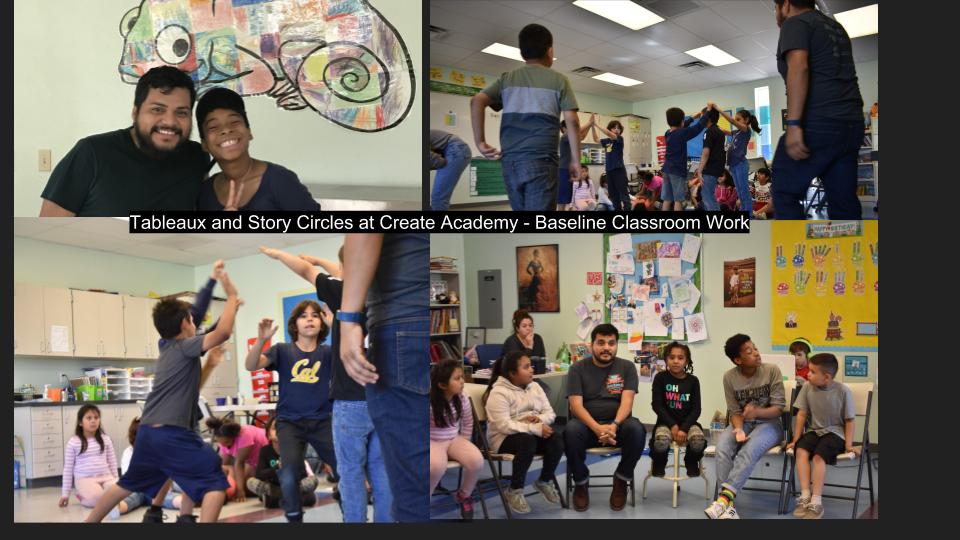 In order to share the experience of this program, school Principal Kelly Horn, Rising Youth Apprentice Teaching Artist Ty Muhammad, and 5th grade student Annabelle had a conversation about the program as they experience it:

How would you describe the theatre program at Create Academy?

A: Whenever I’m in theatre, I learn how to communicate better. We learn how to do drama, we practice different scenes, tableaux, and different games related to theatre. It helps students understand how to learn better to listen to each other.

K: We define the theatre program here as one of our artists in residence which means that we've got these guest artists lare specialists in theatre and the particular case with Rising Youth is that the theatre shares a mission for social activism like our school does. This is an important and very unique partnership. The ultimate goal of the program is that we partner with [Rising Youth Theatre] in creating not only a happier and healthier school community but that the impact of our works help to connect our school to the larger community as well.

T: I completely agree! I would also say it is about how the students connect to each other and interact with each other, as Annabelle mentioned. Students are able to learn how to listen to each other, to learn from each other, and to use theatre games and practices to give attention to things that are important to them. And also the way that y’all talk are able to resolve conflict in general. 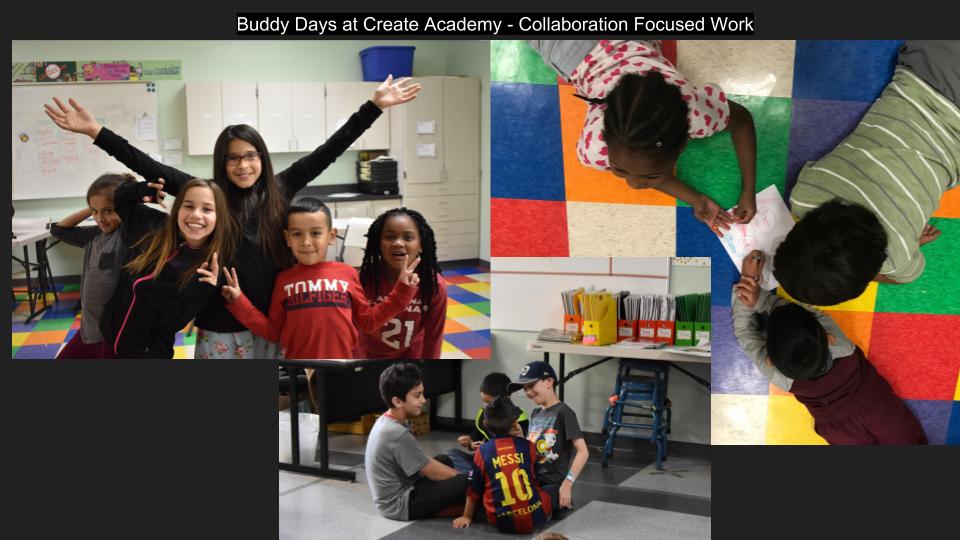 What's your favorite memory from the two years you’ve seen/experienced the program?

A: I like, when last year, when we did tableaux event where we invited parents and we practiced it and we kept practicing it again and again and again and we didn't get to use props because it was our first time but we did get to record it [for practice] and we performed it in front of everyone on the last day of school.

K: I remember, last year, it was I think at the spring festival when we had parents in the audience as well and each of the grades were doing a little bit of what they’ve learned over the year. And there were a couple of moments that really jumped out at me. One of them was when the 3rd grade class was doing their work, a couple first grade parents were able to come into the scene and they could change places in the scene and they could say freeze and jump in and take someone's spot. And it was cool because some of the parents got involved with that and practiced conflict resolution alongside their kids. I think that spoke to some of the community engagement. The other one was when the 5th grade class which is now the 6th grade class was talking about how they had actually used some of the techniques they had learned in the theatre program to talk with one another about some behaviors and bullying and things like that. That struck me because I thought it took a lot of courage for them to even be willing to share that they felt like they were being bullied to a group of strangers..

T: My story is really similar to that. Also last year, when we first started doing story circles, everyone was like "Oh this is gross I dont wanna tell my story." but I have a specific memory of 4th grade now 5th grade of a bunch of students just sitting there, looking bored, not wanting to answer the story circle questions and passing, because we would allow them to pass telling their stories. But then comparing that to the end of the semester, them being very bummed out when we didn't do a story circle one day. So Mr. Julio (one of the other teaching artists) and I looked at each other and realized that we couldn't do the lesson, were gonna do a story circle because it’s what the students wanted. But it was super magical because I didn't realize how important that space had become to the students.

Use one word to describe Create Academy’s current school culture. 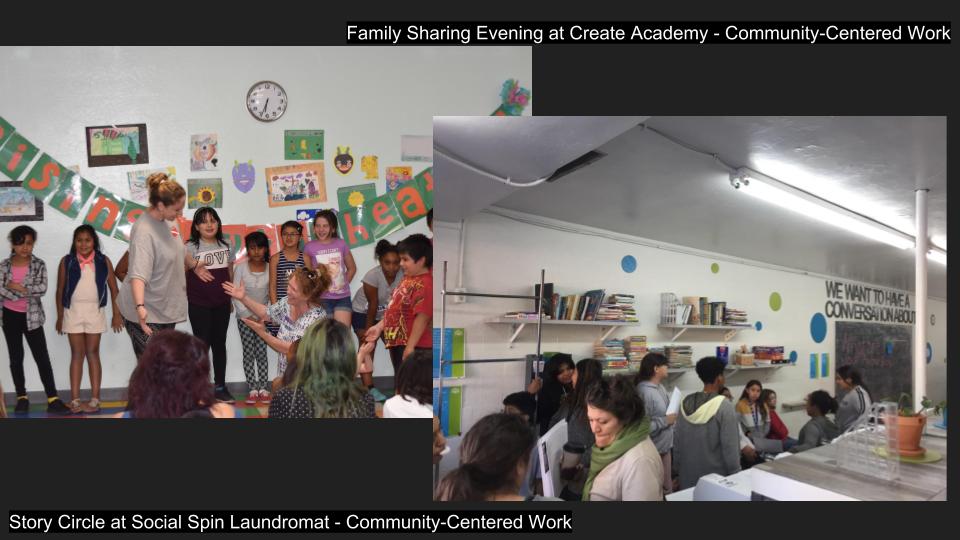 Comparing the beginning of the program to today, how has school culture evolved?

A: Well the first time I was in the class it was with different teachers and we did this energy passing ball where we imagine a ball and we pass it around the circle and we cannot talk while were doing and you have to focus only on the ball and passing it around. And we did other stuff similar to the energy ball except we had to shape it around, turn it into a different shape and then give it to the next person. And now at the end we do harder stuff. We do tableaux and we have taken videos of what we've done with our tableaux. We've filmed it and we created them ourselves.

K: I think students are talking about their problems more with one another in proactive ways instead of destructive ways.

T: I think along the same train of thought, people are more open in general. Not just about problems but I’ve seen students come out of their shell that I never thought would and I've seen friendships grow that I never thought would happen. And it’s really nice to see that, thinking that those two or three personalities would ever come together. It’s really special and I’m really lucky that I’ve been here for both years to be able to see that change. 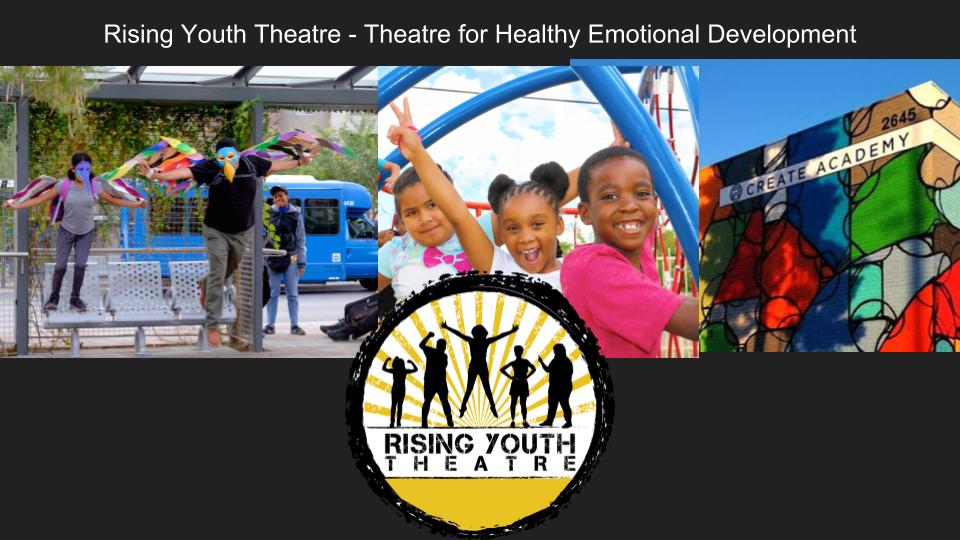 For more information about Rising Youth Theatre and Create Academy, visit their websites:

Through an arts integrated curriculum anchored in project-based learning, Create Academy prepares all students for success in college, career, and society by teaching students to collaboratively invent, design, and implement creative solutions that address societal problems and injustices. www.createacademy.org