Today we honor four exceptional music educators across Arizona, from Mesa to Moon Valley to Show Low. Each of these educators have been recognized the Arizona Music Educators Association for their excellence in music education. Combined, they have dedicated more than 85 years to Arizona students and the arts.

Eric Zimmerman taught music at Independence High School for 19 years. During that time he taught band, orchestra and choir.  While there he served as solo/ensemble chair, instrumental chair and was a member of the AMEA board, as Vice President for High School Activities.  After a stint in administration he has returned to the classroom at Moon Valley High School where he teaches band, orchestra and guitar.

Eric has been married to his wife Molly for the last 28 years and their son Mark is a senior tuba player at Deer Valley working on making All State again.

Jennifer Randle is the Orchestra Specialist for Mesa Public Schools in Mesa, AZ. She is involved in hiring music teachers for the district, mentoring and supervision of orchestra teachers, and overseeing orchestra programs and special events throughout the district. She is also the orchestra director at Kino Junior High in Mesa. Jennifer has had an extensive career teaching orchestra and other music classes for over 35 years. She is currently in her 27th year teaching orchestra in Arizona. Throughout her career, Jennifer has been an advocate for supporting music programs in public schools and providing the opportunity for all students to participate in quality music courses. She is Associate Principal Cellist with the Chandler Symphony and plays with several string groups in the Phoenix area.

Anneka Kotterman is currently in her 10th year as a music educator in Arizona.  After graduating from the University of Arizona in 2009, she taught K-6 General Music at Homer Davis Elementary School in Tucson, AZ.  While at Homer Davis, Anneka directed an after school choir for grades 4-6, wrote and directed an original musical production, and served as the band and orchestra assistant.

During her time in Tucson, she served as the Children’s Choir Director at Catalina United Methodist Church, the Son Life Singers Director at Northminster Presbyterian Church, as well as the co-founder and director of the Bumblebee Choir with the Tucson Girls Chorus.  Mrs. Kotterman returned to Show Low in 2012 to teach choir and drama at Show Low Jr. High School.  While directing school concerts and productions, she pursued a Master’s Degree in Elementary Education.

Anneka is also the co-founder and director of the White Mountain Children’s Chorus.  She has been a guest soloist with the White Mountain Symphony Orchestra and enjoys singing with the White Mountain Chorale.  Anneka began her service to the Arizona Society of General Music in 2011 when she was elected as Secretary.  She has since served as President-Elect, President, and now Past-President.  Mrs. Kotterman is currently the music teacher at Whipple Ranch Elementary School in Show Low, which services Kindergarten through second graders.  Anneka enjoys cooking, watching UofA basketball, and spending time with her family.

A native of New Jersey, John received his BA of Arts Degree in Music Education from Glassboro State College which is now Rowan University, located in Glassboro, New Jersey. He taught in New Jersey for seven years, with two years as a Band/General Music Teacher and the remaining five years as a Choir/General Music Teacher. He moved to Arizona in 1990, waiting two and a half years before obtaining a teaching position as there was no teacher shortage at that time and no positions open.

In the Spring of 1993, John received a call from Mesa Public School to interview for a choral position at Powell Jr. High School with no guarantees that he would have a position the following school year. He is extremely happy to say he is now approaching his 26th year in the Mesa Public School District. His entire career has been dedicated to shaping and molding junior high students to be the best singers/musicians as possible and preparing them to continue their studies at the high school level.  Since coming to Mesa, he has taken on the role of the MPS Secondary Choral Festival Coordinator, MPS Junior High Honor Choir Coordinator and the MPS District Secondary Choral Specialist. Outside of Mesa Public Schools, John is the Music Director/Organist/Choir Director for Hosanna Lutheran Church in Mesa. 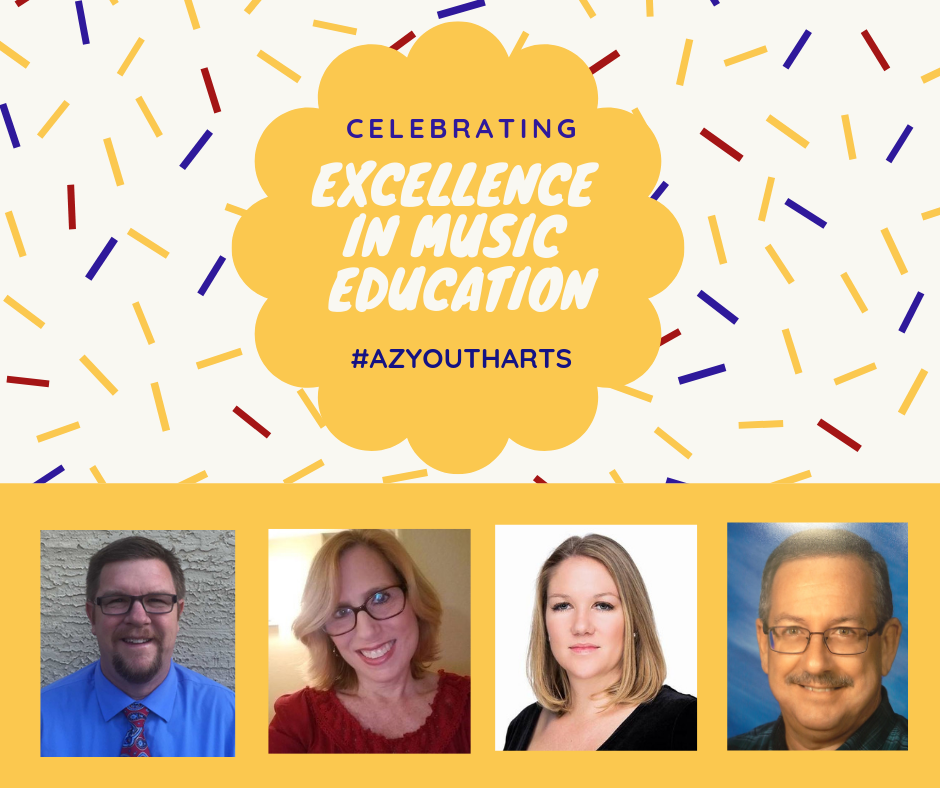 Have a great youth arts story to share in your school or community? Email us at [email protected] or tag us on social media with the hashtag #AZYouthArts